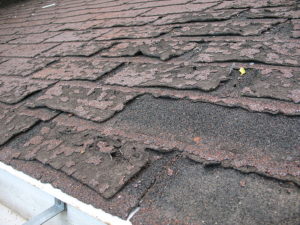 When shingles blow off from a roof, most homeowners’ first questions are usually “Who can take care of this for me, how fast can they get it done, and how much will it cost?” But here’s the most important question a homeowner can ask:  "What made my shingles blow off in the first place?”

Why are shingles blowing off my roof?

Are they attached improperly or has the adhesive worn away? Probably! Shingles stay attached to roofs in two ways. First, there are the nails holding the shingle to the roof deck. Second (and very importantly), there is adhesive on the back bottom side of the shingle that makes it stick to the shingle right below it… this is called “the seal.” Here’s what we found at a service call we went on at a Waukesha home. Upon arriving, the homeowners showed us one of the shingles that had blown off. It was immediately obvious that this shingle had been installed incorrectly: three of the five nails in the shingle had been placed too high up on the shingle, and not in the nailing strip. It didn’t provide adequate holding power, and that’s strike one. Next while up on the rooftop, the homeowners watched as we were able to lift up more than half of all the shingles we sampled… most of the “the seals” had failed. This can happen for a number of reasons, and it was true on this roof. That’s strike two. Finally, the shingles were clearly blowing off in winds far below their wind rating. That’s strike three. Ultimately, the homeowners hired us to replace the entire roof, even though it was only 11 years old. With the seals failed, and the roof improperly nailed, it was clear that the roof was only going to become a continuous maintenance problem.

Should I repair or replace the roof?

Unfortunately – if certain sections of the roof are blowing off, it's probably an indicator that your roof is no longer secure. We always prefer to repair over replacement if it is viable (better for your wallet). But when shingles are blowing off, a full replacement will be the safest option for your family and your home.

If you're located in the Southeaster Wisconsin area and have noticed shingles blowing off your roof, give us a call at (262) 662-5311. We'll be happy to provide you with a free inspection.

Say Goodbye to Cleaning the Gutters!

Why Should I Remove Snow From My Roof?

Get a Free Roof Inspection

Looking for a Free Roofing Estimate?

For more than 30 years, American Roofing & Home Improvements has been providing quality roofs to Southeastern Wisconsin homeowners. Just fill out the form below to get started!